Virginia, Rachel and I spend roughly 15 months raising each calf that originates from the Evert Ranch.  During those months, the calf will grow from 70# to 1300# — gaining the first half of those pounds from a combination of mama’s milk and grass at the ranch and the second half of those pounds on a grain and forage casserole at the feed yard.  It amazes me to think that good nutrition, planning and care can be so effective, but each year the Evert calves get better and better.

We measure performance on the cattle at each level of the production chain.  Virginia is well-known for the “clipboard” that she carries around — making notes on the calves during their time on the ranch.  Each calf receives a visual tag at birth that correlates to its parents so that genetics can be measured.  Things like disposition (how the calf acts around its human caregivers), phenotype, frame scoring, and general health are all combined to determine the total quality of the animal.

When the calf changes address and comes to the feed yard, I tie the visual ranch tag with an EID (electronic identification tag) that allows us to trace performance at the feed yard as well as at the packing plant.  I track three main things: overall health, total pounds gained, and dry matter feed conversion.

When the calf leaves my farm, it travels about 20 miles to the Tyson packing plant in Lexington, Nebraska having spent its entire lifetime within a 50 mile radius.  At that point, the EID tag allows the transmission of carcass data which provides over-all beef quality scoring for the animal.  This data collection includes carcass weight, meat tenderness score, steak measurements, and total leanness of the animal.  The carcass data is the final piece of our report card as beef producers, giving Virginia, Rachel and me information that we can use in the future to continuously improve quality. 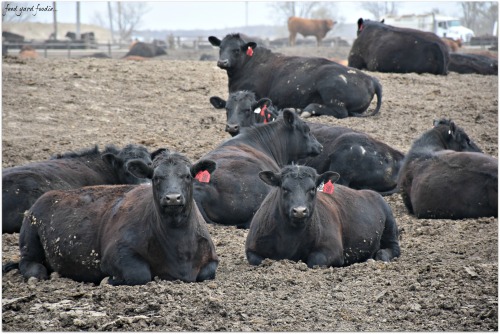 Because animal welfare, food safety, and sustainability are important to me, I look to my packing plant partner to share both my passion and my dedication to excellence on these topics.  In addition to supplying cattle to Tyson, I have the unique opportunity of serving on their Farm Check Animal Well-Being Advisory committee.  As a member of this board, I work to understand and improve animal welfare throughout the entire production chain.

Tyson plays a critical role making beef.  As the last stop for the animals that Virginia, Rachel and I raise, their cooperation and hard work finishes the circle in the production of responsible beef.

I believe that the future of food production lies in the building of strong partner relationships.  It is a complicated and difficult task to grow safe, healthy, and great tasting beef.  As a team, we are able to put the pieces of the puzzle together in the ever important journey of continuous improvement.

**AUTHORS NOTE: Due to the huge response to this blog post and my responsibilities on the farm, I am unable to respond to each comment made by readers.  I am reading the comments, and I plan to post a new blog responding to questions brought up in the comment section within the next few days.  Thank you for reading, and thank you for caring. It renews my faith in our country that 400,000 of you all care enough about your food to read a farmer’s thoughts.

Tuesday, Subway restaurants made the announcement that beginning in March 2016 it will serve chicken raised without antibiotics. Further, the company will source turkey, pork and beef in the same manner within a 10 year period. A spokesman for Subway stated that company’s goal is “eliminating antibiotics from all of its meat supplies within 10 years”.

There are two different things going on in the above statement that are being blended into a mass of dramatic confusion. I want to take a moment to clarify so that everyone can be educated food purchasers.

In my mind, Subway’s announcement states that a bullet is their treatment of choice for sick food animals. They wish to only purchase meat that comes from animals that have never been treated with an antibiotic. Food animals (like cattle) are grown for the sole purchase of providing a high quality dietary protein. If Subway does not want the meat from an animal that required antibiotic treatment for illness at any time during its lifetime, then I have two choices: leave the sick animal to suffer until it likely dies, or shoot it with a bullet and end its life immediately.

As a cattle farmer, it is my job to raise my animals humanely in order to produce safe and healthy beef. It is unreasonable for my customers to demand the impossible. I cannot raise 100% of my animals over a lifespan of almost two years without ever using an antibiotic. Things happen – Animals can get sick.  It is my job to help them when they do.

I want healthy animals that make healthy beef because that creates responsible and sustainable food production. It is the right thing to do to treat a sick animal that needs special care. I should be able to expect my customers to understand that the meat product that comes from that small percentage of animals is still fit for human consumption.

In the twelve month period of August 1, 2014 to July 31, 2015, I treated 7.8% of the cattle on my farm with an antibiotic for an individually diagnosed illness. These animals were treated under the direction of my veterinarian according to Beef Quality Assurance practices. Additionally, in compliance with federal law, those animals were held on the farm until the required withdrawal time passed to ensure that no antibiotics were present in their meat when they went to slaughter.

I marketed approximately 5500 animals during that 12 month period which means that somewhere in the neighborhood of 430 of those animals were treated on my farm for an individually diagnosed illness. Each of those animals produced approximately 820# of meat and other products. Either shooting these animals with a bullet at diagnosis or letting them suffer until they died would result in an estimated 352,600# of wasted product.

That scenario is both irresponsible and unacceptable. I am a dedicated animal caregiver, and I am proud of the beef that comes from my animals. It is safe – I feed it to my family. However, some of it comes from animals that required additional care in the form of an antibiotic to regain health at some point in their two year life time.

As a mother, a farmer, and an American: I recognize the importance of the antibiotic resistance issue. I have blogged about it many times. However, we need to respond intelligently in our quest for a remedy. There is nothing intelligent about a corporate statement that dictates wasting millions of pounds of food each year.

It saddens me that food production has slumped to this level, and I refuse to comply.

**Subway issued a revised statement this afternoon.  You can find this statement along with my responses to questions asked in the comment section of this blog post in a new post by clicking here.