The Ivy League Basketball championship team gets an automatic conference championship berth in the NCAA tournament.  It is likely that many years no Ivy team would qualify for the trek to March Madness without the conference affiliation as larger schools with athletic scholarship possibilities tend to dominate the college basketball circuit.

Conference alliances of college teams are common place with membership bringing the schools recognition, monetary compensation, and the ability to bring the product of athletic entertainment to a broader audience.  The teams continue to maintain their own independent identities while also attaining the expansive status of conference membership. 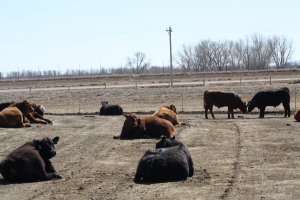 My father-in-law and Archie built our feed yard in the late 1960’s and early 1970’s on the land that Archie’s family homesteaded on a generation before.  The feed yard is literally a combination of a dream and a tremendous amount of hard work.  We have the ability to house up to 3000 cattle at one time—this size was fairly average thirty years ago, but falls much closer to the small end of the scale in 2014.

The truth is that I love the small scale of my cattle farm.  Although I assume all of the responsibilities that come with being the owner/manager, I am still able to be very “hands on” with my animals working alongside my crew of three.  Exercising/acclimating calves, leading the processing crew, reading bunks and periodically checking daily cattle health are all things that I love to do.  I know that if I expanded the size of my farm that a lack of time would necessitate that I give up some of those “hands on” things.

There are 4 X as many cattle as people in Nebraska…

The down side of a small farm in rural Nebraska is having a large enough supply of cattle to be able to build the brand and marketing program that I need to bring a responsibly raised and quality beef product to those customers that desire it.  I recognized many years ago that something was going to have to change for my small cattle farm to remain sustainable in the ever evolving industry of beef production.

I needed an alliance — I was the small Ivy League school that wanted a chance at the the big dance…I went looking for cattle feed yard conference to join in order to reach my goal of long term sustainability while still remaining true to my personal daily commitment to animal welfare and high quality beef.

My oldest daughter is a lot like me, he is good for both of us…

My husband often looks at me with a patient smile on his face and says, “Anne, there are few people in this world that can live up to your standards.”

It is no secret to anyone who knows me that I am an incredibly particular person.  I set the bar high in a constant search for excellence.  I don’t settle, and I spend each day trying to inspire my daughters to share that same passion.

More than a year ago, my feed yard became a part of the Progressive Beef team, and joined the cooperative called the Beef Marketing Group.  Progressive Beef and BMG gave me the conference affiliation that I needed while still allowing the independent identity that I desire for my farm.  The alliance is a strong one, and I am proud to be a part of such an innovative and quality minded group of cattlemen.  Honestly, I view this affiliation as one of the greatest successes in my professional career.  I recognized what challenged my cattle business, and single-handedly found a way to fix it while still remaining true to the standards that make me uniquely Anne.

My alma mater has never been able to make their Ivy League conference affiliation result in a win in the final game of March Madness, but Will Feed Inc. made the winning slam dunk with their conference alliance with the Beef Marketing Group.