I am mostly a “morning person”.  My body is trained to get up and go to work at 5:30 every morning because I feel that it is important to get breakfast delivered to our cattle shortly after dawn.

My animals are Creatures of Habit and I think that they are more efficient convertors of my natural resources if they are provided with a consistent feeding schedule that involves an early breakfast.  This is especially critical in the summer months when nightly temperatures are in the 60’s but daily temperatures top out in the 90’s.

Because I go to work early every morning, I really do not like to work at night.  My body tends to yell at me when I run short of sleep, and it has been years since a nap has appeared on my radar screen.  Despite this, every once in a while I need to be at the feed yard to unload new cattle during the night hours.

A cattle semi-truck backing up to my unloading chute about 12:30am…

Nebraska does not have a large number of fall born calves due to Mother Nature’s shorter growing season, so I sometimes look to states south of me to find fall calves.  These animals tolerate the summer time temperatures in Nebraska really well, and they go to the packing plant before winter gets too cold.  The only down side is that they have a longer truck ride coming into the feed yard, and they tend to arrive in the small hours of the morning thereby wreaking havoc on my sleeping schedule.

When I receive cattle in the middle of the night, I unload them off of the semi-truck and place them in one of the corral pens that is adjacent to the unloading chute.  It is important after a long truck ride to provide newly received cattle with fresh long stemmed prairie hay, water and a comfortable place to lie down and rest.  Using our corral areas to do this enables the cattle to remain in a well-lit area of the feed yard so that they can easily see the fences and rest until the sun comes up. 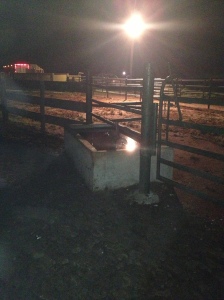 One of the water tanks in our corrals that provides fresh water to the cattle as soon as they get off the truck. You can see the corral lights reflecting of off the water!

In the home pen checking out their new surroundings once the sun came up!

Once dawn appears, we place them in their new home pen where more fresh feed, water, and a comfortable living space awaits them.  After a short time of eating and drinking, the cattle look for a good place to lie down and take a nap. 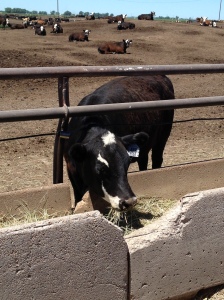 I watch this napping with envy as I do believe that they have an easier life than I do!

4 responses to “An Infrequent Night-time Chore…”